My story and how I got here

In 2012, while expecting my first son, my husband and I decided we needed a bigger house that would fit our growing family, problem was, I already started painting the mural for my son's nursery.  It stressed me out to think that I would only have a few weeks from the time that we moved in, until the time that he was due, to start and paint a mural in the new house!

I started experimenting with wall paper techniques in hopes that I could paint a mural before hand, and when we closed on the house, come in and put them up. Paper just wasn't working out, it would wrinkle and crumple.  So I thought about painting on canvas.  I experimented with different thicknesses, cut them out and viola!  Worked great! 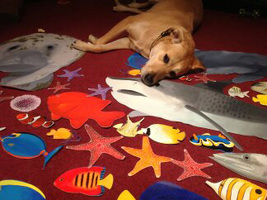 Addy helps with the painting

The dogs would often interupt the creative process.

When we closed on the new house, I was able to paste the mural pieces to the wall.  Luckily, I got them all up, before Ian made his debut, two weeks early.

Painting each piece separately, initially solved my problem of purchasing a new house, but if also solved problems that other people had too.  If you live in an apartment, you can't exactly have something handpainted on the wall... and what if you have to move?  You have just spent all of that money for something that you can't take with you.

Since you can put each piece up, you can also take each piece down.  My son is quickly approaching the age where he wants something new, instead of his ocean room. I can take each piece down and save them for him in the future... for either when he has children, or if I decide to steal them and put them up in my bathroom!

Another problem that it solved... I wanted something unique. I didn't like the cookie cutter decals and themes that were out there. Being a SCUBA diver, I wanted to share my love of the ocean with my son, so I painted realistic fish in hopes that it would give him the feeling that he was under water.  Currently at the age of three (almost), he knows all of the names... he even says that the sharks scare off monsters. 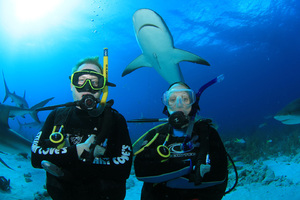 My husband & I SCUBA diving with sharks; before kids.

While we were expecting our second son, I started the process all over again. I knew that I wanted an Australia themed room.  I have been obsessed with Australia since the first time I hear Men At Work.  I headed to Pinterest to see if there was any inspiration I could glean from their site.  To my dismay, I found very little.  I found a ton of African safari themed rooms, but no Australian rooms. I had to start from scratch and did a ton of research. I wanted to capture the idea and feeling of the Australian outback, but also include a lot of the unique animals from Australia.

If we were ever to have a third child (which we aren't)... I would have to paint a Volkswagen themed room (my favorite car is the old school beetle).  No kids on the horizon, but I have an office that needs decorating!

In closing, I would love to help you create the perfect room, a room that you feel priviledged to walk in to. Please give me a call to start the process. I look forward to speak with you and creating the room of your dreams.

Mention the Orlando Magazine article and receive a special discount.